The Publisher Reflects on George Weigel

Last week, George Weigel, a NY Times Bestseller and a regular commentator for CBS recommended Journeys with a Tin Can Pilgrim by Lynda Rozell. Our book was listed in his Christmas letter on books to read over the Christmas holidays, and in the letter, our little publishing company was listed.

The letter was also shared in First Things, the leading journal aiming to advance a religiously informed public philosophy. 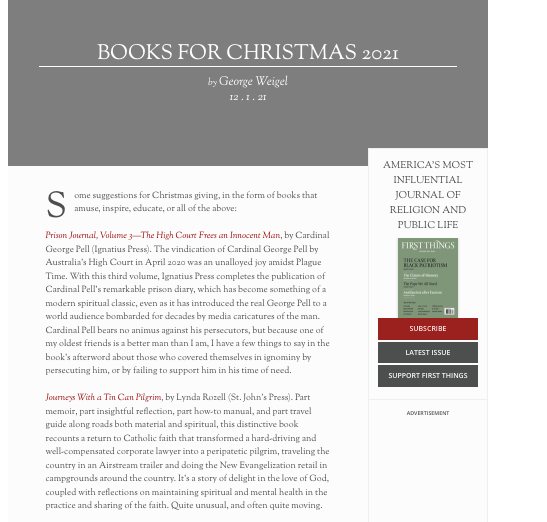 My first real job in Washington D.C. was working as a research assistant at the premier institute of the Ethics and Public Policy Center (EPPC). The same think tank where George was the Distinguished Senior Fellow. I started at EPPC when George was in the midst of writing what was to become the definitive biography on Pope John Paul II.

As one of America’s leading public intellectuals and Catholic Theologians, George could be quite intimidating for a mere research assistant. In general, EPPC was an intimidating place because I had not been a philosophy or a history major. And I was now in the throes of assisting great scholars with their bodies for work. The mission of EPPC is “to apply the riches of “the Judeo-Christian tradition to contemporary questions of law, culture, and politics, in pursuit of America’s continued civic and cultural renewal.”

At EPPC, I developed a love for the underpinnings of how history, philosophy, and law influence the direction of society.

Starting out at EPPC, I would see George walking deep in thought. He was focusing on completing the 1,056 page book on Pope John Paul and had a strict deadline. The goal was to get it out by Christmas 1999, in time for the millennia. There was very little wriggle room for pauses.

Ever Horan Johnson, my friend, and colleague was George’s pacesetter. She was George’s research assistant, and one of her many roles was to help ensure George made the writing goals for the day. Ever was also accomplished with four languages under her belt.  Prior to EPPC, she had been an intern at the US embassy in Iceland and at the Vatican.

Seeing them work together was a valuable learning experience on how to write a book. Goals were broken down into small bite-sized pieces. Many times passing by Ever’s office, I could hear George exclaim with pride to Ever when he had reached the goal of the day.

At times George would look up from his deep thoughts to go to daily Mass with Ever sometimes joining him.

One day, Ever invited me to come along, and we went across the street to the Catholic Information Center chapel for Mass. The break from the daily bustle of life to be in stillness and prayer for 20 minutes became a habit. This habit resulted in weekly instructions by Father Michael Curtin and ended with officially entering the Catholic Church on December 5, 1998, in a small ceremony at St. Matthew’s Cathedral. I had the privilege of George Weigel reading at the ceremony. Ever was my sponsor with other luminaries such as Michael Uhlmann and Dr. Robert Royal celebrating this occasion.

And now, George reviewed one of my books. I am honored and know if it had not been for the Author Lynda telling her story far and wide, George would not have gotten our book in his hands to read.

Looking back, I realize st. john’s press’ founding principles are very much influenced from my time at t EPPC.  At EPPC, I learned about the importance of beauty of friendship, faith. And lastly how words and philosophy can change the direction of society.

This website uses cookies to improve your experience while you navigate through the website. Out of these, the cookies that are categorized as necessary are stored on your browser as they are essential for the working of basic functionalities of the website. We also use third-party cookies that help us analyze and understand how you use this website. These cookies will be stored in your browser only with your consent. You also have the option to opt-out of these cookies. But opting out of some of these cookies may affect your browsing experience.
Necessary Always Enabled
Necessary cookies are absolutely essential for the website to function properly. These cookies ensure basic functionalities and security features of the website, anonymously.
Functional
Functional cookies help to perform certain functionalities like sharing the content of the website on social media platforms, collect feedbacks, and other third-party features.
Performance
Performance cookies are used to understand and analyze the key performance indexes of the website which helps in delivering a better user experience for the visitors.
Analytics
Analytical cookies are used to understand how visitors interact with the website. These cookies help provide information on metrics the number of visitors, bounce rate, traffic source, etc.
Advertisement
Advertisement cookies are used to provide visitors with relevant ads and marketing campaigns. These cookies track visitors across websites and collect information to provide customized ads.
Others
Other uncategorized cookies are those that are being analyzed and have not been classified into a category as yet.
SAVE & ACCEPT
Share This